Name them and they become yours. Think of your children, who are named even before they're born. We name our cars, our books, our homes, our pets. When John and I lived in Kyoto, we inherited two lorikeets from the family next door, who were moving back to England. The birds were always making a ruckus, cooing or chattering to one another. We named them Billy and Cooey. Sometimes we'd leave their cage door open so they could fly around upstairs while we were gone. One day we accidentally left the window open and out they flew. Billy came back, but soon perished from lovesickness.

I love books about animals. Growing up in New England, I read all the Thornton Burgess stories. Reddy Fox, Sammy Jay, Billy Skunk were as real to me as my friends in school. When we moved to our grandparent's farm, my sister and I spent weeks taming the barn cats and giving them secret names. I  still remember the day Pumpkin was run over. Nana lifted her off the road with a shovel and dropped her limp corpse in the ash pile. I watched from the upstairs window and wept at the unceremonious burial.

My friend, Doris Ober, has written a heartwarming book called The Dogtown Chronicles: Our Life and Times with Sheep, Goats, Llamas, and Other Creatures. Doris and her husband Richard populated their ten acres in this small California town with a menagerie of animals: a llama named Lloyd, a ewe named Little Lulu, Scottish Highland steer named Moe and Curly, geese called Mother Goose and Alger Hiss, and goats Mephisto and Isabella, among others. For Doris, born and raised in Manhattan, taking care of animals was a challenge. "Once I understood them, I loved them truly and deeply. This is a most selfless kind of love—love of sheep, love of goats—because understanding them means knowing deep down that they don't love you. Not at all." And we grieve with her when she says, "When they go, there goes part of you. Everything that was between the two of you, vanished."

It is emotionally wrenching to lose an animal through separation or death. This is particularly true of dogs, with their unconditional love. Animals are intuitive. They sense our moods and our needs, sometimes even before we do. As Doris says "The grief we have for people who die is much different than what we feel for our pets—even for the people who have seen our true selves, as the dog and the cat and the horse have—because people are not silent, our love of them and theirs for us is conditional."

When John and I moved out of the house that we'd rented for seventeen years, we also left behind our landlady's Rhodesian ridgeback. Comet spent much of his time at our house; keeping me company as I gardened, sleeping on our porch on hot summer nights, romping and kicking up his heels in the pasture. He was always ready to jump into the back of John's van for a hike, whether we were just walking locally in Tryon Creek park or setting out for an arduous hike in the Columbia River Gorge. Although we did not name Comet or own him, we felt that he was our dog. And he was—for awhile.

To see photos of the stars of Dogtown and to read more about The Dogtown Chronicles, go to www.dogtownchronicles.com
Posted by Margaret Chula at 10:26 PM No comments:

On October 9, a large crowd gathered in the Wordstock room at the Expo Center in Portland Oregon to hear Kilong Ung and me read from our new books. I began with poems from What Remains: Japanese Americans in Internment Camps, illustrated by posters of quilts by my collaborator Cathy Erickson. Kilong read from his memoir Golden Leaf, A Khmer Rouge Genocide Survivor. The audience was in tears hearing about his last moments with his mother before his parents were taken away and killed. Only he and his sister survived. Our readings were a departure from the plethora of coming-of-age novels and New York Times best seller authors, offering a more reflective and somber note to the weekend of literary events.

Powells' Books sponsored a book signing following each reading. It was fun to meet the other author's who had presented at the same time as me. Because there were six events each hour, I was unable to hear many of my favorite author's read, which was frustrating.

The high jinx of Wordstock occurred at the Authors' Party held the evening before at the Cleaner's Event Space adjacent to the Ace Hotel. Wine and conversation flowed smoothly and laughter bounced off the walls and ceiling.

I met Chelsea Cain outside the Ace Hotel. We were wearing the same lacy short dress; hers was pastel blue, mine black. This definitely called for a photo!

Then there was Laura Winter, performance artist and poet. We had a good time perched in the corner, our wine and cheese waiting on the windowsill as we talked about our creative ventures and "Po Business".


For more information about my recent books, visit http://www.margaretchula.com
Posted by Margaret Chula at 10:31 PM 1 comment: 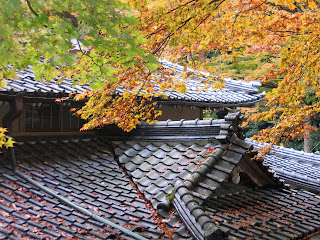 Today 10-10-2010 is my birthday. After weeks of activity—giving programs and poetry readings, traveling, teaching workshops—I decided that today I would do as much of nothing as possible. In my readings, I learned that the number ten signifies that the cycle is complete and that everything is in its proper order. Whatever thoughts and feelings are put out on this day will manifest or multiply three times.
At 10:10 a.m. I sat on my meditation cushion, took out a new stick of incense, lit a candle in the shape of a chrysanthemum, and tapped my Japanese meditation bowl three times with a padded stick. As I chanted the Heart Sutra
ma ka han nya ha ra mi ta sin gyo
kan ji zai bo satsu .......
I began to feel that I was inside a cocoon of peace—memories of walking in  the cedar forests of Ohara, monks chanting at Sanzen-in, their breaths visible in the cold morning air, fields of pink cosmos swaying in the wind, the sound of an invisible stream. And I wondered why all my memories of tranquility were set in the past and in another country?
Returning to my body sitting on the cushion, I came to the realization that this moment 10-10-10-10-10 would never come again. What if we lived our lives this way? Cherishing each moment or even each day?
After chanting and meditation, I opened Daniel Skach-Mills’ book The Tao of Now to a random page. Here’s the poem that came to me today.
Twenty-Five
Can you tend a garden
without turning deer and insects
into enemies?
Can you drive a vehicle in winter
without making a menace
of snow?
Can you plan a gathering
without planning on others
to execute and follow your plans?
Practice what’s easy first.
Then, when illness comes,
and finally death,
you’ll be ready
to let go of plans;
drive straight ahead;
attend to what’s being eaten away
without bitterness.
When life moving in
and out of itself
is all you can see,
then you are at peace
with everything.
Copyright Daniel Skach-Mills


The Dao of Now is available at Amazon.com and at the Lan Su Chinese Garden gift shop in Portland.