Please note that I am adding all new blog posts at this site http://www.margaretchula.com
Posted by Margaret Chula at 3:59 PM 1 comment:

One of the great joys of my life is hiking every week with the WWW (the Wild Women of the Woods). Whether climbing Dog Mountain in the springtime or winter walks around Portland, we always enjoy each other's company while getting exercise to boot. The WWW's is what the women's encounter group was in the 1970's—emotional support, networking, and having a good time.

On May 11, I was invited to be the featured reader at the Milwaukee Poetry Series held at the beautiful Pond House in Milwaukie, Oregon. It was a rainy spring evening and outside ducks were swimming on the pond bordered by iris. The hour-long reading was a retrospective of my work, spanning haiku from my first book Grinding my ink to selected readings of tanka, haibun, and lyrical poetry from subsequent collections. Music from Shostakovich's Quartet No. 8 played in the background as I read my accompanying poem "Purge."The evening ended with "Death is a Butterfly," which the organizers had graciously printed on a broadside for people to take home. This poem was inspired by the Takacs Quartet's rendition of "Soft Sleep Shall Contain You" by Daniel Kellogg. The final two poems were composed in my role as Poet Laureate of Friends of Chamber Music (http://focm.org/about/poet-laureate/).


Bend Haiku Weekend (June 3-5, 2011) was a gala event held in the historic Liberty Theater and coordinated with the First Friday Art Walk. The Haiku Society of America invited me to give a talk on "Haiku Inspired by Ikebana." Since it was early June, I decided to use iris for my floral demonstration, along with some peonies that I bought at the local Trader Joe's. For greenery, I followed the rule of ikebana ("use whatever materials are available") and snipped some branches off the dense foliage outside the Phoenix Hotel. The event, organized by an'ya and her husband Peter, was a huge success. Five thousand people toured through the Liberty Theater that weekend. One unusual feature was the Haiku Wall papered with over eight hundred haiku from poets all over the world. It was a great surprise to hear that I had won the haiku contest sponsored by the 5 Fusion Restaurant, one of the event sponsors, just down the street from the Liberty Theater. My prize: a bottle of Haiku wine!


Spring is spectacular in the Northwest. A time to begin digging in the garden and planting. Bushes and flowers all burst into bloom, one after another. We had some special visitors this year as well: a rabbit I named Camille and a doe and her two fawns. 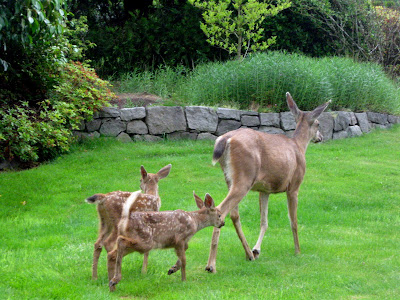 Figures of Speech organizers Steve and Constance Hall invited Cindy Gutierrez and I to read at their monthly poetry gathering at In Other Words Bookstore on June 21. Joining us was a delightful cellist, Kendra Carpenter, who accompanied Cindy and me and greatly enhanced our readings. Kendra is the owner of Swaha Studios and performs sound healing, combining techniques drawn from traditions such as Taoism and Buddhism. Steve produced an elegant broadside of Cindy's poem "If You Must Die" and my poem "Transition" with his own Portland bridge drawing on the cover. It was a very moving and entertaining evening—and we were all wearing red, white, and blue!
(to be continued....)
Posted by Margaret Chula at 9:19 PM No comments:


In ancient Roman religion and mythology, Janus is the god of beginnings and transitions. He appears as a two-faced god, one head looking back the other forward. His month, January, signifies transitions—gates, doorways, endings, and time. During the final week of every year, I like to take time to look back at the events and all the new friendships I've made. Here are some of the high points.

We ushered in 2011 at Camp Sherman, celebrating with friends at their cabin on the Metolius River. We enjoyed sitting around the fire reading and playing games, hiking in the snow, eating home-made meals and, especially, playing with their puppy Cooper.

On January 7, I was invited to speak at the Tomodachi-kai, a group devoted to nurturing friendship and cross-cultural understanding between Japanese and American women and their families. In the beautiful setting of the Nichiren Buddhist Temple, we wrote our first haiku of the year and then enjoyed special New Year's dishes.  http//www.jaso.org/tomodachikai.html).

In March, I joined our Oregon Poet Laureate Paulann Petersen, Penelope Scambly Schott, and Carlos Reyes teaching a full day of poetry workshops sponsored by the Manzanita Writers. This Poetry Fest drew writers from all over the state and we all had a creative and convivial day. On March 26, I joined several poets at the Multnomah Library in downtown Portland where I read my short story "Father's Overcoat" published in VoiceCatcher 5. VoiceCatcher is a non-profit collective that nurtures women authors and artists in the Portland/Vancouver area. The women who volunteer their expertise, time, and energy to publish this journal are extraordinary!

On May 6, I drove with my friend Penelope Scambly Schott to the Poets Concord held at the Hallmark Inn on the Oregon coast in Newport. We both gave workshops. Hers was "Writing Crazy: Poetry Beyond the Predictable World" and I gave a workshop with Ce Rosenow (President of the Haiku Society of America) entitled "Haibun: The Harmony of Poetry & Prose." Many participants were new to the haibun form and eagerly embraced the challenge of combining prose and haiku.

The Lane Literary Guild sponsors the active and venerable Windfall Reading Series held at the Eugene Public Library. On May 17, they invited me to read with Kenneth Helphand in an event titled "Beauty: The Ultimate Strength." Professor Helphand teaches architecture at the University of Oregon. His book "Defiant Gardens" documents a selection of gardens built by prisoners of war, especially those in World War II ghettos under the Nazis. For my portion of the program, I read poems from my new book "What Remains: Japanese Americans in Internment Camps," accompanied by a slide show of corresponding quilts by Cathy Erickson. One of the poems, "Afterimage," is written in the voice of a Japanese American man who builds a sand and stone garden at the Minidoka camp in Idaho to beautify his surroundings in the barren desert. Visit "Featured Book" on my website www.margaretchula.com to read more.

Posted by Margaret Chula at 2:58 PM No comments: