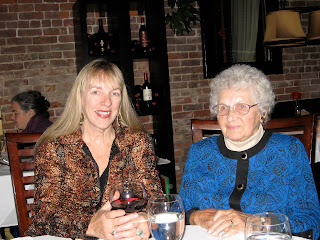 In late March, I traveled across the country to help my mother move into an assisted living facility. She had been living in a Victorian house which had been converted into independent living for elderly women but, for the last couple of years, she had difficulty navigating the stairs. On each visit home, we would sort through a drawer. Last year it was the "scarf drawer." All the scarves were arranged by color, nested in tissue paper, and scented with all the exotic soaps I had sent her. On another visit, we winnowed down her jewelry, a more daunting task.

This time we had a deadline, April 1. I looked around her room, in her closet, on the sun porch. Yes, we could finish in four days. What I didn't realize was that each hanger in the closet held two blouses and the portable closet on the porch was packed full of clothes. "There may be some more up in the attic, too," Mother said quietly. There were.

She presided over the sorting while sitting in her recliner chair, directing me how to fold the clothes that were being given away, where to put the clothes she was taking with her, and keeping an eagle eye on me so I wouldn't sneak anything into the trash. I held each blouse up—about 300 of them, including a soiled dickey from the 1940's—for her scrutiny. We made three piles: take with her, give to her friend with a big family, and donate to the Survival Center. Several blouses had stains on them. "Oh, put them in the corner and I'll wash them later," she said. "Mother, we have to be out of here in three days. You don't have time to wash blouses."

My mother is ninety-four. She lived through the Depression. At the end of three days' work, about a hundred hangers surrounded us. She sorted through them, tied them all up by size, shape, and color and put them in the hallway with a sign: "Free Hangers." On the porch were bags and bags of bags: plastic, gift, and paper. Also a large collection of rags, neatly cut into squares and rectangles—all pressed and folded.

When Mother turned ninety, her hip began to bother her and she reluctantly gave up golf. My brother, also a golfer, carried her golf clubs down from the attic and placed them near her chair so she could enjoy them for a few days. Her matching short sets and golf shirts went to the Survival Center, where they would probably not be worn by golfers.

On moving day, my brother and his son-in-law came and hauled all the clothes, books, and furniture to the assisted living center. When Mother and I arrived, the rooms were filled with boxes to be unpacked. We decided on the arrangement of the furniture quickly and where to hang the art work. Next we needed to go to Walmart to purchase some necessities: a shower stool, towel hanger, curtains, bins to store her clothes, a table cloth, and some yogurt and fruit drinks. The excursion would require a lot of walking—too much for Mother. But there, lined up at the Walmart entrance as promised, was a fleet of electric cars. "Whatever you do, don't get in front of her," the store clerk advised as Mother took a seat. At first she navigated the aisles in fits and starts, but once she got the hang of it, she took off—literally. I went up and down the aisles calling her name for about five minutes, then heard the back-up "Beep! Beep!" and there she was. Two hours later, we were in the check-out line. "I never could have done this without the electric cart. It's good to try something new!" she said proudly." We celebrated her success by going out to lunch. 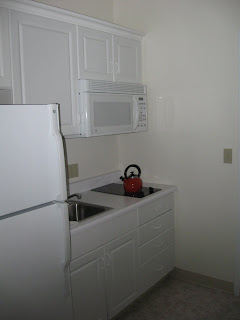 Although Mother's new accommodations were beginning to look homey, the kitchenette still looked antiseptic and cold. I remembered what a friend said to me when John and I moved into our new home: "The first thing you should do is buy a tea kettle and sit down and have a nice cup of tea." So I went out and purchased a small red teakettle. It looks cheerful in her spick and span kitchen, a burst of color welcoming Mother to this new phase of her life.
Posted by Margaret Chula at 7:40 PM